Elk's Taco Brothers is a fun and easygoing slot with five reels and 243 ways to win. The feud between the three Mexican siblings and the evil Captain results in a highly entertaining game, while the setting helps to set the scene where the action takes place: a quaint little village in Mexico. Here is more information about this offbeat slot game and the adventure it will take you on. Read our full review below.

Things to know before you start

You can play Taco Brothers for free, with no need to make a cash deposit. If you prefer, you can play with real money. There is no need to register or download anything, and the game should appear in your browser instantly. Taco Brothers is completely mobile-friendly and can be played on mobile and tablet devices in addition to desktop. This means you can have fun playing this game on your Android phone, iPhone or iPad tablet, to name just a few. One look at this animated game by Elk and you'll be hooked!

According to the developers, the three main characters, Pepe, Pico and Paso, are protecting the town's precious tacos and pesos from the cunning Captain Diaz. As the story goes, all is fine and dandy in the village of Santa Maria with enough tacos to go around, but then the appearance of arch-nemesis Captain Diaz quickly turns things around. The devious character sends the village dwellers into a frenzy, and their only hope is for the three brothers to defeat Captain Diaz and reclaim the community's tacos. This adventurous theme continues throughout the game, with the men having to escape from jail and face up to the intruder! 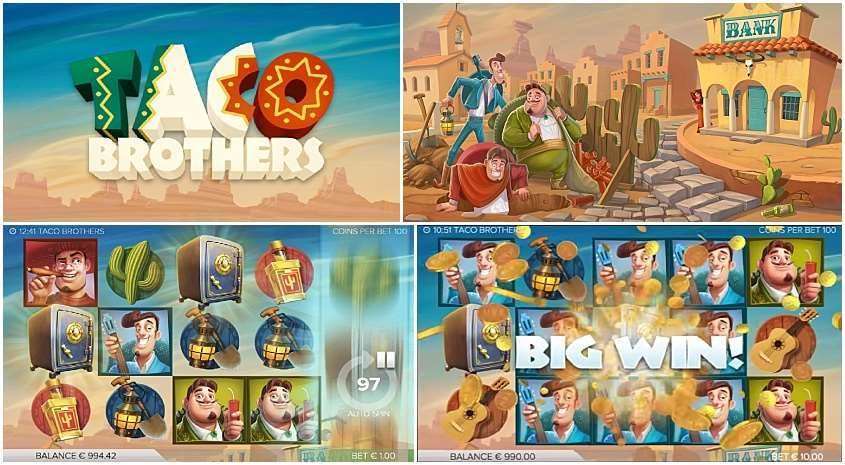 The reels are set in an eerie landscape with nothing but blue skies, sand and cacti around. The only sign of life seems to be the distant buildings that appear through the hazy heat. The reels tell a different story, with a female beauty (who, as it happens, is the daughter of the enemy) being the brothers' wing woman! Other symbols include a cactus, a traditional guitarron, a safe, a lantern and spade, a bottle of alcohol, and, of course, the three charming characters. One clutches his musical instrument, the other has a cigar, and the third has a stick of dynamite in his hand ready to throw at his enemy, Diaz!.

The objective of Taco Brothers is to land specific combinations on active paylines to win prizes, all while helping the heroes break out of jail and defend their town's tacos. Thanks to some brilliant features, you can enjoy pleasing wins while playing this intriguing slot. With the help of the Wild Escape Bonus Game, you can blow up the safe and empty its contents through the secret tunnel. Senorita Diaz offers a helping hand. Join her and the three Ps on a wild journey featuring free spins, multipliers, re-spins and some running wilds. The developers at Elk have a winner in the form of Taco Brothers, and it's sure to keep players coming back to seek more taco-related adventures.